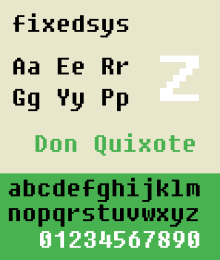 Fixedsys is a family of raster monospaced fonts. The name means fixed system, because its glyphs are monospace or fixed-width (although bolded characters are wider than non-bolded, unlike other monospace fonts such as Courier). It is the oldest font in Windows, and was the system font in Windows 1.0 and 2.0, where it was simply named “System”. For Windows 3.x, the system font was changed to a proportional sans-serif font named System, but Fixedsys remained the default font in Notepad.

No money, a tweet is what we need! Use the below button to share our work on Twitter, help us increase the visibility of this project. It is a small effort that we ask of you, it helps our team to have credibility and to be able to acquire new customers for our services. Thanks!

You can use the following code to get old fashion style on your project.

You can use our general-purpose themes

Special Thanks to Adam Moore (LÆMEUR)